After I flagged this question as being "too broad", I went to check its status and clicked flag again. It shows me that I raised 2 flags on it, one for it should be closed for another reason... and one for it is a duplicate.... Both these options are also disabled and so I cannot raise the flags again for these reasons.

This seems to be a bug as I didn't raise a flag for it being a duplicate but only one for it to be closed for being too broad. Can this be fixed please?

EDIT: Another question with the same issue. I'm starting to believe that it happens with all questions flagged this way. 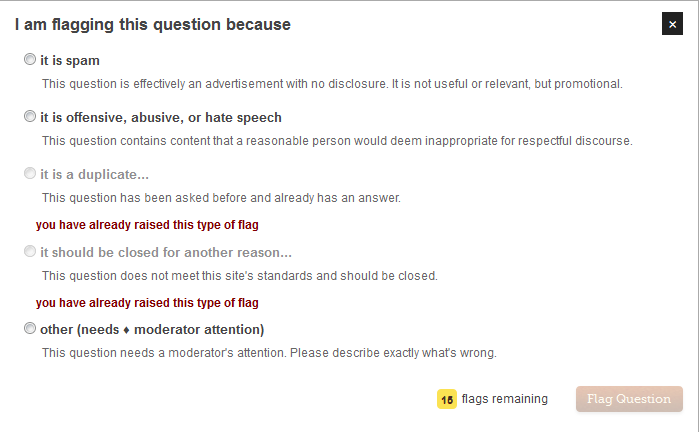 I think this makes sense, even if it's not the most clear language: it's saying that you raised that type of flag (a close-vote-ish flag) already, not that specific one. It's not telling mods you raised both of those flags, don't worry.

And you can't vote to close a question for two different reasons, so it's pretty consistent that you also can't flag it for multiple close vote reasons. If you really need to convey extra information you can use a custom flag. For example if you didn't realize it was a dup, and now you do, it could be helpful to tell us what question it's a duplicate of.

Not the answer you're looking for? Browse other questions tagged bug status-bydesign flagging .

Welcome!
This site is for discussion about Seasoned Advice. You must have an account there to participate.
Help

3
does "this will kill you" count as a flag reason?
7
Can we replace some of the leftover "Food and Cooking" references?
10
Incorrect positioning of phrase "accept or start bounty"
6
How important are the correct flag reasons?
9
Flag helpful but obsolete comments?
2
Why was this comment-flag declined?
2
How should we flag suspiciously low quality questions?
4
Why was this comment flag declined?